So you want to be a roboteer?

It seems that every week there’s news about a new amazing application of robotics, from e-commerce, to growing food or building houses. While for many people this may seem to be something for the distant future, it is happening now and will continue to scale rapidly over the next couple of years.

This rapid acceleration results from a convergence of factors, including advances in sensors, deep learning and computer vision algorithms, chipsets that can handle AI tasks and software standards such as the Robot Operating System (ROS).

We’ve seen this before

This has many parallels with the development of the mobile ecosystem a few years ago. For decades, phones were dumb, like the industrial robots that build most cars today. Then, advances in hardware and software made it possible to create a smartphone with incredible flexibility, which led to an explosion in the number of applications.

We’re now seeing the advent of smart robots, including autonomous mobile robots, self driving cars and trucks; autonomous drones and unmanned aerial vehicles; special-purpose robots for pipe inspection; and many others. In a way, this feels like the months before the launch of the original iphone.

Taking an even broader look, the widespread adoption of new technologies in the past have had profound impact on productivity, which in turn have improved quality of life for most people. The current acceleration in automation is generating significant anxiety around the impact it is likely to have on employment. Without a doubt, as automation in general and robotics specifically are deployed at scale, change will inevitably happen in employment patterns.

However, much of the discussion to date seems to assume a fixed demand. History shows that as efficiency increases and prices drop driven by technology, demand grows to absorb much of the increased capacity, thus creating opportunities for everyone. 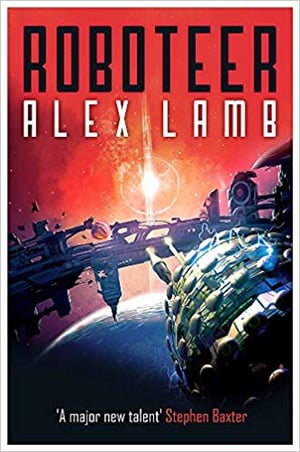 The best science fiction writers allow us to imagine a new world while helping us think critically about our current experience or conditions.

In the sci fi novel Roboteer, Alex Lamb introduces the main character Will Konu-Monet, who was “modified at birth to interface with the machines used to assist and maintain the infrastructure of his home world.”

The word roboteer isn’t new, but the notion of a human operator using technology to become a sort of robot wrangler seems compelling and necessary. Some of the most ambitious undertakings for humanity, from dealing with climate change, to large scale oceanic projects, to off-world settlements, will require a level of automation that doesn’t exist today, but is tantalizingly close.

Beyond sci-fi, there’s much discussion currently about levels of autonomy, specifically around self-driving cars. These levels of autonomy range from basic (driver) assistance to the elusive Level 5 offering full automation. However, even at Level 5, humans are required to provide direction: determining destination, when to leave or perhaps choosing the scenic route or a stop at a fast food place along the way.

Generalizing to other automation systems, research is currently underway on Human-Autonomy Teaming, based on the idea of humans interacting with increasingly autonomous systems as team members, rather than simply using automation as a tool. In the near future many of us will have robotic co-workers, and it will be as common as using a smartphone or a power tool.

All this will require careful orchestration of automation solutions. At InOrbit, we envision a world where humans, robots and AI work together to drive radical improvements in productivity and empower people to reach new heights.

Back to the future

As the author William Gibson wrote, the future is already here, it’s just unevenly distributed. We are already seeing some of the elements outlined above coming together.

Without going to the extreme of genetic modifications and hardware implants, we are already seeing companies setting up Robot Operations Centers (ROCs). InOrbit provides a cloud platform that enables companies running distributed fleets of robots to efficiently develop, deploy and operate automation systems at global scale. Or as I like to tell my team: we ROC!

Using InOrbit, operators – or, dare I say, roboteers – can monitor the health of their fleet in real time, get notified when there’s an issue, and resolve problems remotely. Using a mobile device or a browser, they can send the robot on a mission or even take full control and navigate the robot remotely and safely. Moreover, getting real-time information from distributed robots makes it possible to identify problems before they occur, by using our AI capabilities.

You can sign up for InOrbit for free by visiting our InOrbit Control center.