A big week at InOrbit

Few things are more devastating for a startup than to be working on the wrong problem. That’s why we spent time early on, before we had even formed our company or written the first line of code, to make sure we were working on a real problem that has a significant impact for a large number of people. We met with dozens of people across the robotics landscape to learn, asked lots of open-ended questions and listened carefully, honing our pattern-recognition.

To be honest, we actually cheated a bit. Or a lot, actually. We started this process with an unfair advantage: my co-founder Julian’s experience over the previous +7 years building software for robotics companies, often times building roughly the same solution from scratch to solve the same problems over and over. This gave us a running start, knowing in depth the strengths and pain points of influential companies, including Willow Garage, Clearpath Robotics, iRobot and Savioke to name a few.

During the better part of 2018, we were heads down on solution validation, working very closely with a small set of committed and very patient early adopters, who helped us refine our product with their invaluable feedback, suggestions, bug reports, and general fandom. We are grateful to Fellow Robots, Iron Ox, Rover Robotics and many others. Along the way, we also kept talking to people in the robotics community and iterating, redoubling our efforts in areas that were promising and leaving behind some ideas that did not seem to catch on. We learned some of what worked and what didn’t, and this got us to the end of the year with our very first (modest) revenue.

But you can never know too much about your customers … at least in the B2B world, where this is not as creepy as it sounds for consumers. I like to say that a startup is a learning machine – not to be confused with machine learning (hint: we do that, too.) So you have to be constantly learning new things. That’s why this past week was a big deal for us, as it marked the confluence of learning efforts that we started at the beginning of the year.

We applied to Plug and Play’s Supply Chain and Logistics accelerator before the end of the year. Plug and Play is the ultimate innovation platform, connecting the best technology startups and the world’s largest corporations. In fact, we were one of 1,000 startups that applied to this program. The list got whittled down to 22 through the votes of leading corporates, including those shown below. Then we did it all over again and were selected for the IoT batch. 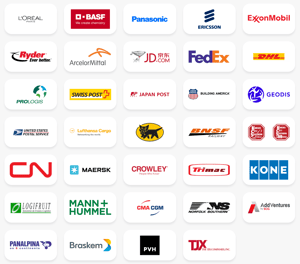 We’ve been parallel-tracking in these two batches and have met with over 25 of the leading companies to learn about their plans for automation. Last week was the Plug and Play Spring Summit, a demo day where we got to pitch in front of hundreds of attendees (video), most of which were representing corporates across several industries. Through this process, we were able to validate our go-to-market hypotheses and we learned last week that we have been approved for a proof of concept (PoC) by one of the corporates in the program.

Speaking of PoCs, last week we also wrapped up another collaboration with one of the leaders in the robotics space. This company has hundreds of robots in the field right now and will have thousands by year end. Since they already have a mature infrastructure, our focus was to identify new capabilities and use cases that could be enabled through the InOrbit platform, including real-time analytics and remote interventions.

We concluded with a demo that was attended by over 20 people across the organization, including senior executives who provided invaluable feedback and shared ideas for how this could potentially be used to improve internal functions, from sales to product development. When we set out to build InOrbit, we knew that we had hit on some common needs across the industry and also expected that they would manifest in slightly different ways at each company, so we built flexibility and extensibility into our platform. One of the best feelings in tech is when people take something you’ve built and use it in ways you had never anticipated.

Before the week was over, we were able to squeeze in a meeting with one of the largest technology providers in the world to explore how our technologies can complement each other to help drive the adoption at scale of autonomous robots. We expect to be doing more in the coming months to help connect the various technology pieces and operational best practices, so please stay tuned. It takes a village (or an ecosystem) to tackle some of humanity’s most vexing problems by making it possible for humans, robots and AI in the cloud to work together.

One of our driving strategies at InOrbit has been “learning at scale”. Although we still have much to learn, as a company and as an industry, this past week was the culmination of many months of accelerated learning. Thank you to everyone who made it possible.

You can sign up for InOrbit for free by visiting our InOrbit Control center.