A Farm Of Robots: How Do We Define A Collection Of Modern, Smart Devices?

A flock of seagulls. A school of fish. A gaggle of geese. Collective nouns in English are a lot of fun. However, when it comes to a collection of robots, we’re missing the mark, especially in the context of modern, smart robots.

In the industry, the term in wide use is a fleet of robots. In fact, many robotics companies sell a companion “fleet manager” box to control their robots. It’s not that the term is inherently wrong, but it has outlived its usefulness.

According to Merriam-Webster, the noun “fleet” refers to “a number of warships under a single command” or “a group (as of ships, planes or trucks) operated under unified control.” If you think of a robot as a passive machine that requires a human operator, then perhaps this is an appropriate term. However, modern robots exhibit a level of autonomy that makes them both more complex and more capable than a traditional piece of machinery designed to be manually operated.

In less than two decades, cloud computing has enabled an unprecedented level of scalability. Besides core technologies like virtual machines, this was made possible through the adoption of tools and best practices broadly known as DevOps, which increase an organization’s ability to deliver applications and services at high velocity.

As smart robots grow in numbers from thousands to millions of units, a new set of technologies and approaches known as RobOps is bringing some of the proven benefits of DevOps to robotics. However, just like the cloud put its own spin on existing technologies, companies must adapt the existing practices in order to achieve massive adoption of robotics.

A guiding principle in DevOps is commonly explained through the pets versus cattle analogy. Randy Bias, who helped popularize the expression 10 years ago, started using it to make the distinction between traditional on-premise servers (typically a physical box in an office or data center) and the then-newer world of the cloud.

As Bias writes, “In the old way of doing things, we treat our servers like pets, for example, Bob the mail server. If Bob goes down, it’s all hands on deck. The CEO can’t get his email, and it’s the end of the world. In the new way, servers are numbered, like cattle in a herd. For example, www001 to www100. When one server goes down, it’s taken out back, shot, and replaced on the line.”

It’s a little harsh but appropriate in the world of the cloud, where spinning up a new virtual machine can be done in seconds, and shutting one down can be even faster. In addition, nobody ever got emotionally attached to www100.

Robots are a bit different. Besides requiring significant effort and cost to manufacture, the process of deploying a robot in a new environment often requires trained personnel. In addition, modern robots work alongside people, who can and do get somewhat attached to them.

It’s not uncommon for robots at hotels or retail locations to be given nicknames by the staff. In some cases, they hang lanyards with homemade badges. Robotics companies may try to make their robots friendlier by adding some non-functional googly eyes or wrapping them in cute outfits. When a delivery robot at a major university caught fire, students showed they missed it. 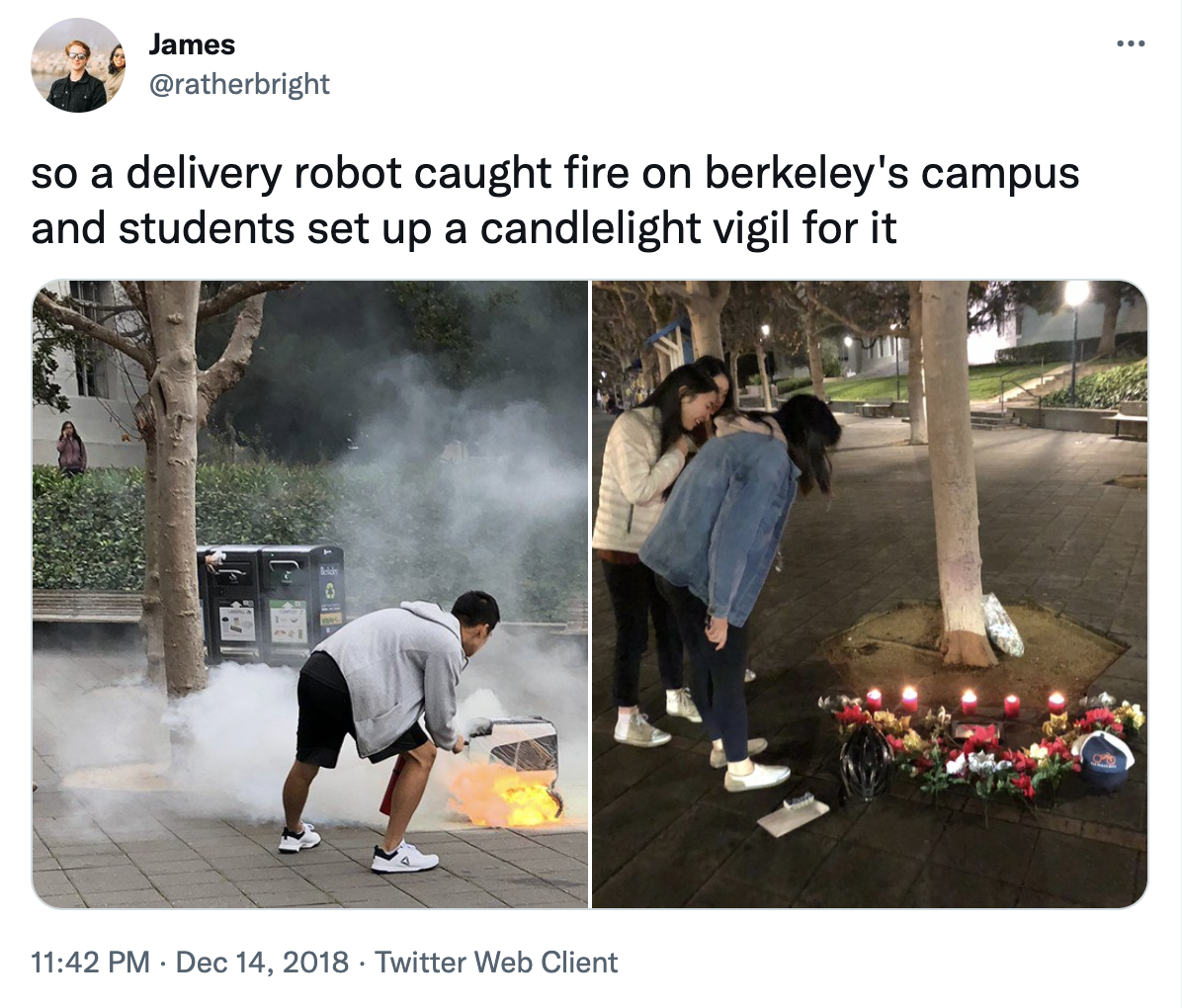 Robots seem to fit somewhere between a cute pet and an anonymous herd of cattle destined for the abattoir. In addition, modern robots come in many different shapes and sizes, optimized for the specific task they are designed to carry out. It is increasingly common to have multiple robots in a single location, such as a large warehouse for e-commerce fulfillment, zipping around transporting items for orders, loading and unloading trucks, carrying out inventory checks and even cleaning the floor.

Perhaps the term “a farm of robots” will catch on as an alternative to “fleet.” Just like in the traditional children’s song Old MacDonald, a farm is characterized by many animals of different types. Farmers and their children may give names to some of their favorite farm animals, but there’s no mistaking them for a pet: they serve a utilitarian purpose and have a “job” to do at the farm.

The analogy applies more broadly. “Raising” (building) a robot requires significant effort. They are introduced to a particular “habitat” (site) and must get along with other types of robots. When they’re “sick” (have errors or require maintenance), it may be time to call a “vet” (a technician or a remote operator, known as a roboteer.)

Channeling Randy Bias, we may describe this cattle vs. farm approach in the following terms.

“In the old way of doing things, when one server goes down, it’s taken out back, shot, and replaced on the line. In the new way, servers have wheels, legs, arms or wings and have a job to do in the physical world—we call them robots. When one robot has an issue, it’s nursed back to health, and when more are needed, we just order some more so they can join the farm.”

If we have our way, the use of the term robot fleet will prove to be fleeting.

* Image credit: @ratherbright
* This article was originally published on Forbes.com