Last week, InOrbit was thrilled to be in Atlanta, once again meeting with friends, colleagues, and customers for the premier supply chain experience trade show, MODEX 2022. Our team, InOrbit CEO Florian Pestoni and Strategic Business Advisor Ángel Hernández, took to the floor exploring the best in next-generation supply chain solutions including the latest in equipment and technology innovations. As expected, there were robots everywhere. There were a lot of happy faces at the show, since for many attendees and exhibitors this was their first in-person conference in years. In-between meetings, our team took in the amazing tech on the show floor and got a chance to reconnect with InOrbit partners IRL sharing our ongoing mission to promote RobOps @ scale. 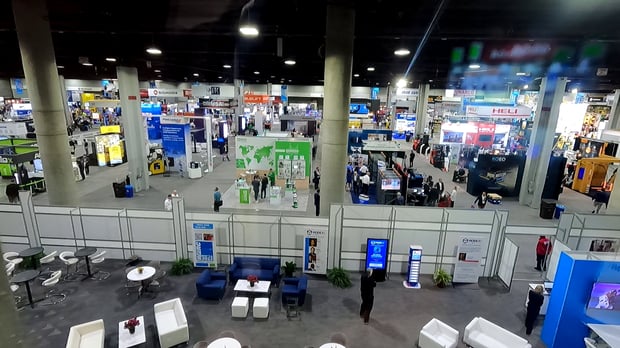 The star of the show

So what struck our team most about MODEX 2022? In Florian’s words “the pick and place robots were out in force.” This area of automation is seeing some exciting developments, and a new wave of smart robots was on display at the show. Florian couldn’t help but compare the developments here to where AMRs were just 4 or 5 years ago. If you’ll recall, at that time a lot of development work was still going on in the lab. The technology had yet to be proven in the field and the positioning was largely academic.

Now those AMRs have proven their worth in warehouses, and are moving to other areas, from improving back-of-store to sidewalk delivery. Additionally, new use cases such as floor cleaning and inventory management, are also being automated. Picking and Packing robots seem poised to be the next frontier in successful robot integration.

Industrial robot arms, leveraging enhanced vision and AI systems, were the unadulterated star of the show, so here are a few of our favorites. Ambi Robotics who has been working with parcel companies to pick and sort packages showed off how their AmbiSort systems lets them handle more. RightHand Robotics made a splash showing their piece-picking capabilities with a unique robot gripper that combines robotic fingers and suction capabilities.

Covariant showed off their AI Brain at an integrated robot piece-picking station with an ABB IRB 1300 robot arm, and Kindred announced the impressive INDUCT workcell for small parcel fulfillment.

Finally, although it’s a bit of a stretch, as it’s really more of a mobile manipulator, the ever-impressive Boston Dynamics showcased the production-ready version of their mobile robot Stretch (now available for commercial pre-orders). 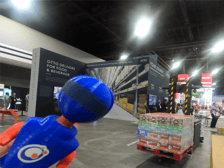 While robot arms may have been the highlight of the show there was some great technology on display from a few other vendors definitely worthy of note. On the Material Transportation front  Seagrid’s new Palion Lift AMR made its debut and is coming to market this Spring. The autonomous forklift leverages 3D vision-based navigation technology alongside Seegrid IQ autonomy technology in an impressive package. Additionally, OTTO Motors’ (ne: Clearpath Robotics) newest autonomous forklift Lifter also made its debut at the show. Built to be nimble in crowded warehouses, they claim this is the “smartest autonomous forklift on the market.”

Seeing the results of recent mergers in action was also a high point. Locus robots we’re seen in action alongside recently acquired Waypoint Rototics’ Vector and MAV3K warehouse robots. Zebra was also out in force showcasing their integration with AMR pickers from recently acquired Fetch Robotics. Notably, the new FlexShelf AMRs the FlexGuide and RollerTop Guide both integrate the FetchCore fulfillment software.

Finally, we have to mention the impressive developments shown for micro fulfillment centers, and Automated Storage and Retrieval Systems (ASRS) by some of the standouts. AutoStore showed their MFC system at work with a lot of bins and a lot of movement. Likewise, Exotec had an exhibition of their very impressive, award-nominated, Skypod System. It’s always a pleasure to see companies we respect on display.

Ultimately, the best part of the show was getting a chance to connect with friends and colleagues we don’t get to see everyday. We talked to a lot of people, raised a glass for RobOps, and even had time for some shenanigans with our robot friend InOrbito. Have a look at our image gallery below for more. If you didn’t get a chance to connect with InOrbit at MODEX, feel free to drop us a line anytime, and we hope to see you at the next show in person.  🤖🦾