This past year at InOrbit has been our most exciting yet. Our company turned 5 years old, and we’ve been thrilled to witness and (modesty aside) help inform the changing robotics landscape. Today we reflect on our growth, and success as we look back at the year that was 2022.

This year has been full of disruption in the robotics field at large. Some may have been swept up in the hype around showy, if perhaps impractical, advances in androids like CyberOne, or Optimus. Others may focus on advances in innovative robotic arm tech like the Tactile Telerobot, Ambidex, or the ongoing innovation and success of companies like Teradyne. Of course, it hasn’t all been good news, supply chain issues still plague us, the labor market is rebounding, but still chaotic, some companies like Amazon and others have cut robotics jobs, and verticals like last-mile delivery have seen even more setbacks. But there’s reason to hope, and change is inevitable. Mobile robot shipments (that’s AGVs and AMRs) grew significantly this year. And initiatives towards more openness and tool sharing are becoming commonplace, just look to DeepMind, Nvidia, the thunderous consumer response to OpenAI’s ChatGPT, and our humble contributions to AMR interoperability. More on that later though, for now, let’s take a stroll through the year that was at InOrbit, to celebrate our growth and success.

If there’s been a theme for InOrbit this year it's making connections. In June we launched the ambitious InOrbit Connect robot certification program. Designed to simplify the process for companies looking to connect their robots to the cloud. Now companies deploying robots can add one or hundreds of robots to their InOrbit account with a single click, and access the new comprehensive Robot Directory that includes InOrbit Connect-certified robots.

InOrbit Connect aims to streamline the connection between robot developers and end-users. To reduce friction and remove barriers that often impede getting valuable, real-time robot operations data across tasks, models, and vendors. InOrbit Connect enables robot developers to easily collect data from all their robots in the field to drive continuous improvement. At the same time, end-users can access all the critical operational data they need in one place, regardless of robot vendor, by simply connecting their robots to the cloud with a single click.

We didn’t stop there though, we were thrilled to announce a new connection with IOC launch partner Kärcher. A collaboration that brings real-time observability, and optimization along with newly launched advanced operations capabilities to the world’s leading provider of cleaning technology. The story of the partnership is one well worth exploring, and as seen recently, award-worthy in its innovation. 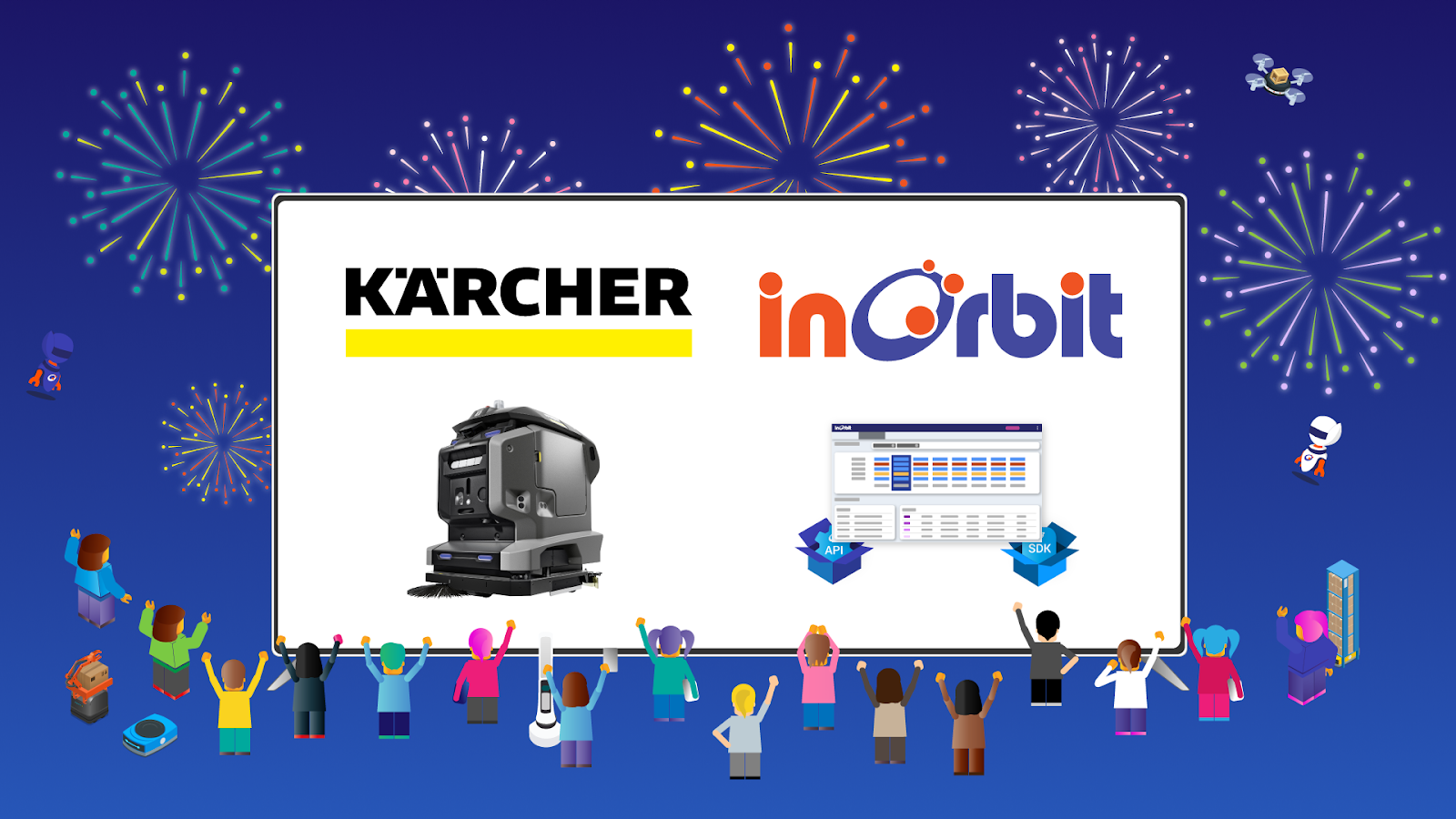 Marco Cardinale, Vice President of Floor Care Solutions & Robotics at Kärcher, offered some kind praise for the InOrbit team and technology noting “....InOrbit is recognized as the leader in RobOps, and through this collaboration we can jointly offer the most advanced and efficient solution to our customers.” Our on-demand webinar with their Kärcher team explores our connection and work together in much more detail.

Circling back, the Connect program has seen fantastic interest since launch. While we’ve been honored by partners like Kärcher embracing the program from the start, significant additions to InOrbit Connect came in October, which saw an expansion to the Robot Directory by 300%. Adding a host of newly Connect-certified companies. This means end-users looking for immediate solutions to their automation pain points can now find more and more varied robots that are certified to work with our orchestration tools.

The tools themselves, have been dramatically expanded as well.

As developers ourselves, we know that the right tools can have a dramatic impact when it comes to managing the integration of robots in real-world environments. What works in the lab may not work in the field. This year we’ve continued building on the success of the InOrbit Developer Portal, with the launch of support for Configuration as Code to streamline developer workflows to meet specific needs.

This is a vital DevOps practice that has allowed massive data centers and cloud applications to scale. The configuration of every computing resource can be handled through code, such as scripts and API calls, enabling greater control and more advanced logic.  Now instead of relying on an operator to click buttons in a user interface, an engineer can selectively configure more advanced settings by writing efficient code. We know that flexible capabilities are required to streamline the development and management workflow, particularly as robot deployments scale. Devs can explore some examples of CaC implementation here.

We took Config as Code a step further with the release of Advanced incidents in June. This update is really exciting as it gives truly granular control to robot developers. Through Advanced Incident support, configurations can be applied broadly to an entire robot fleet while unique edge cases are handled in the exact way that our users expect. Parameters such as location, hardware, status, and data sources can be chained together to define a unique multi-parameter state that InOrbit uses as a trigger for responses.

InOrbit Head of Product John Simmons explained that “InOrbit’s Advanced Incidents are designed to give robot operators the power to describe scenarios using any number of data sources, spatial calculations, time ranges, and more.  Even more importantly, Advanced Incidents require no changes to the robot software itself, decreasing the time required to implement new incident monitoring from weeks or even months to minutes.”

InOrbit users have been very excited to explore how multiparameter programmatic rules can enable the effective management of their common autonomy exceptions and mission execution services.

Another major pain point for those deploying and managing robots was also addressed this year with the release of Data Backfill. This is another piece of the puzzle for how to maintain end-to-end observability under even the most demanding conditions, eliminating gaps in collected data by reconstructing a robot’s operating history through offline data saved and backfilled upon reconnection. We know robots are often operating in locations with unstable network connections, or even blind spots. Data Backfill supports robots, incident analysis, and reporting under different network and operational conditions – even if a robot is operating completely offline. Perhaps the biggest story InOrbit told this year was about the value of interoperability. As a technical mechanism, interoperability allows different robots to speak the same language. Interop is a critical tool to realize robot orchestration at scale. As you may know at InOrbit we've always been hardware agnostic and dedicated to giving developers the tools they need to build the unique solutions their customers want. Interoperability has always been core to our development philosophy, as it directly supports the 3 Cs of robot orchestration. 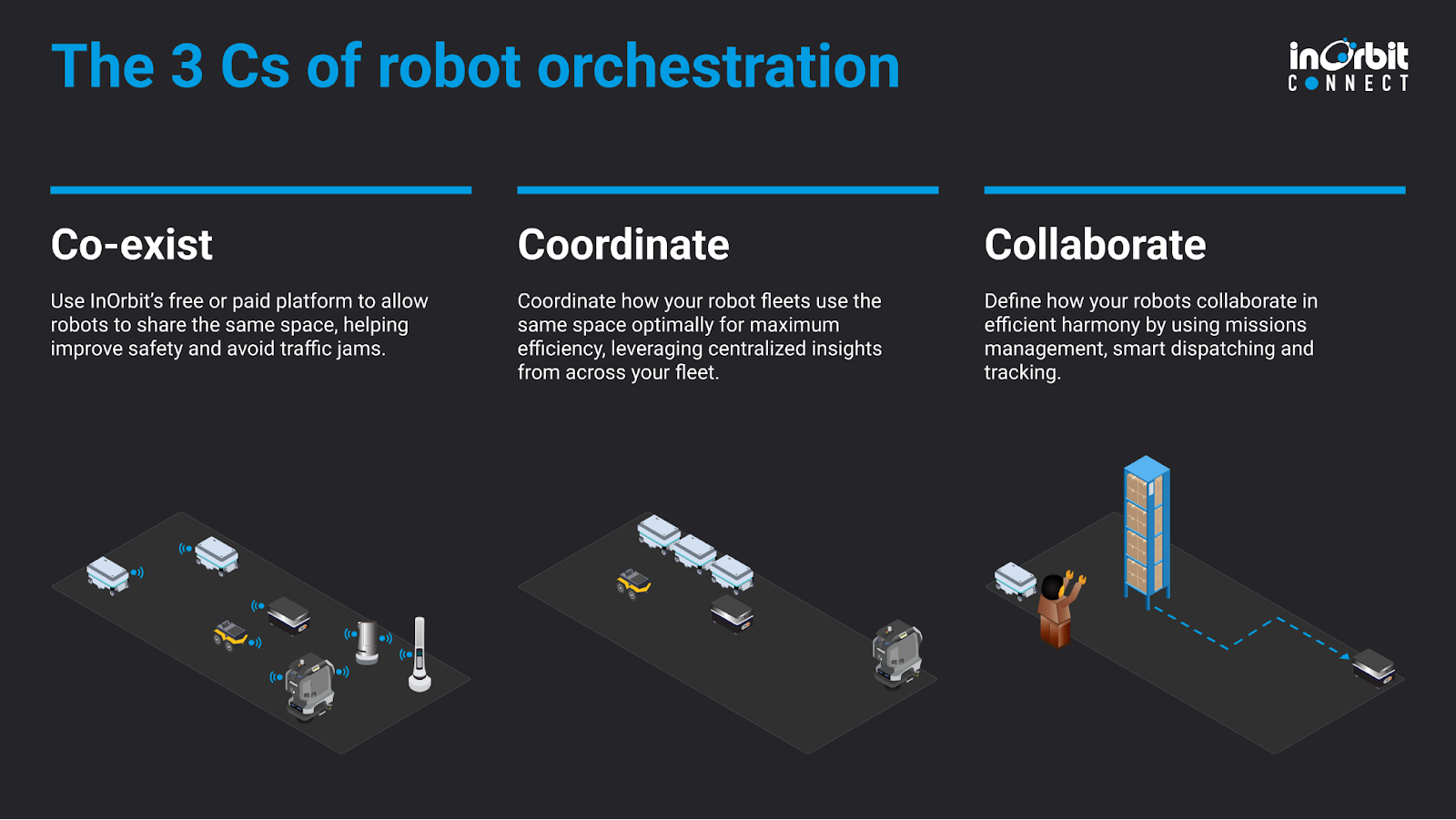 At the Autonomous Mobile Robot & Logistics show this year we impressed audiences with two very exciting interoperability demos, bringing what has been theoretical for many robot developers into reality. 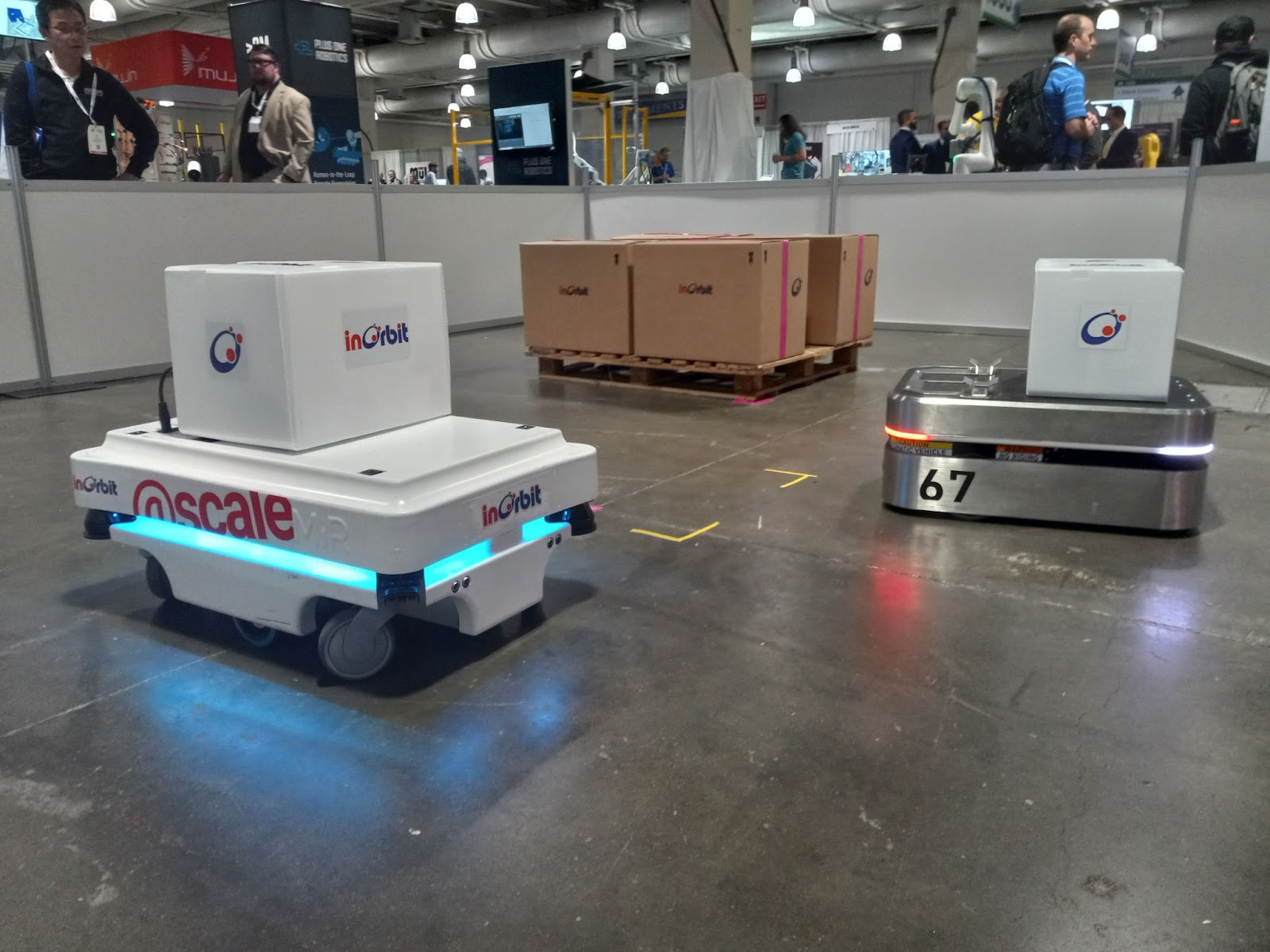 First, alongside partners from OTTO Motors, we showed two AMRs from different vendors coordinating movements in the same space. This was facilitated by a new open source ROS2 to VDA 5050 connector, developed by InOrbit in collaboration with Clearpath Robotics with assistance by Ekumen. Feel free to explore the connector yourself on Github.

InOrbit CTO Julian Cerruti spoke further with developers about the new connector in a lightning talk at ROSCon in Kyoto which you can watch here.

AMR&L also saw InOrbit participate in a live demonstration of the MassRobotics AMR Interoperability Standard alongside partners from Locus Robotics and MiR. Joining the organization as participants in the MassRobotics Resident Startup program, last year we launched an open source connector for this emerging standard as well. Looking to next year we’re excited to help drive the next version of the standard's development.

InOrbit Connect leverages our expanded interoperability tools to integrate the broadest set of robots, whether they connect via the native InOrbit Agent, the Robot SDK, via some of the most popular commercial fleet management software, or through emerging interoperability standards like VDA 5050 and MassRobotics AMR Interoperability Standard. Explore InOrbit’s interoperability efforts more in this recent on-demand webinar.

The most important connections

The best thing about this past year has been connecting with people. Members of the InOrbit team attended over fifteen robotics events in 2022. We connected with friends, colleagues, and customers who let us know again and again how effective RobOps is positively impacting their growing fleets. We educated some, learned from others, and had a lot of fun along the way as we traveled around the world, more than once.

We launched both YouTube and Discord channels this year to connect, even more, We hosted Lives, and contests, including a giveaway for some pretty sweet gear.

A few standout events really made this year special and unlike any previously for InOrbit. In September our whole company gathered together in Buenos Aires for a week of sharing learning and team building. As a distributed team this was the first time many of us had even met each other in person, so The Gathering holds a special significance for all of us at InOrbit. We also made this craziness… 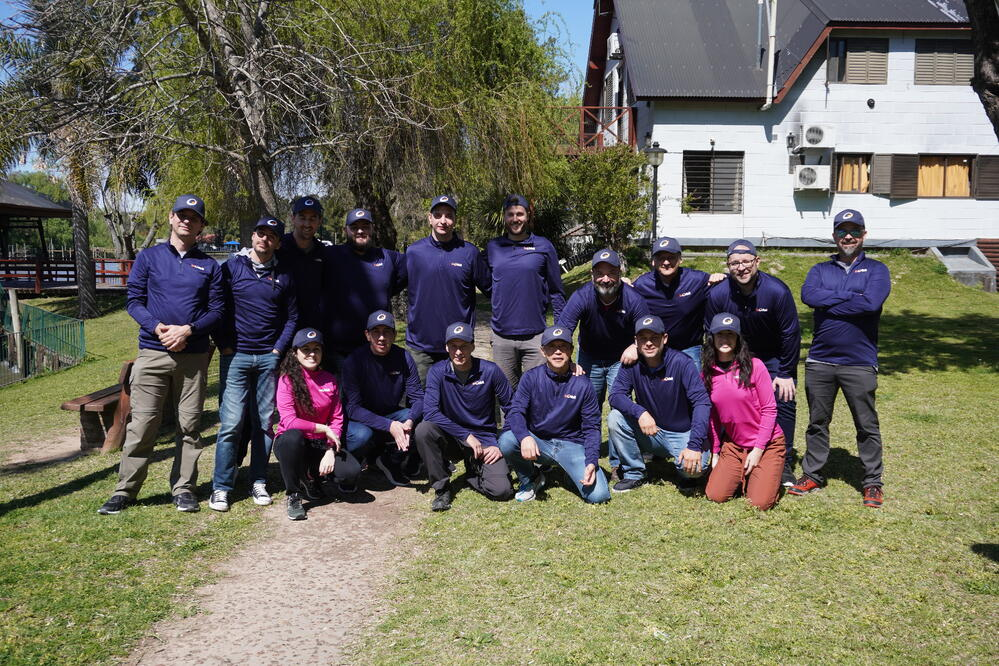 The other special event, run by our friends at The Robot Operations Group, was this November’s inaugural RobOpsCon. The ROG’s dedication to promoting RobOps education and best practices through their monthly meet-ups and expert interviews aligns with InOrbit's mission to maximize the potential of every robot. The event brought together practitioners and a leading panel of multi-disciplinary speakers across industries for conference sessions with speakers from leading companies. InOrbit was excited to participate as a founding sponsor for this fantastic event. 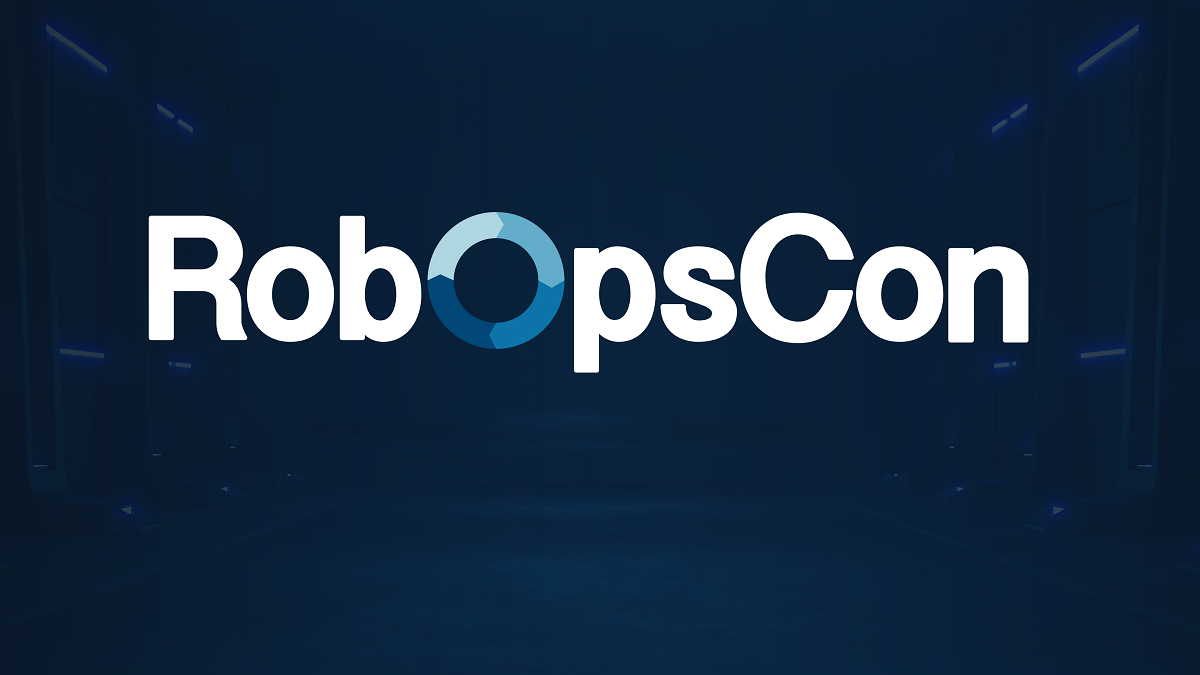 InOrbit’s Head of Product John Simmons reflected further on the significance of the momentous meeting noting that it was a wonderful first step towards “all of us working together, sharing our ideas and lessons learned, challenging one another, and celebrating our victories.”

These connections at events or online with each other, our peers and users have been incredibly meaningful to us this year. That’s why we make a point of joining partners for discussions and sharing our expertise with conversation after conversation.

Besides, we still have a few plans up our sleeve…